Find this article at:
go.ncsu.edu/readext?825834
— Written By Danny Lauderdale 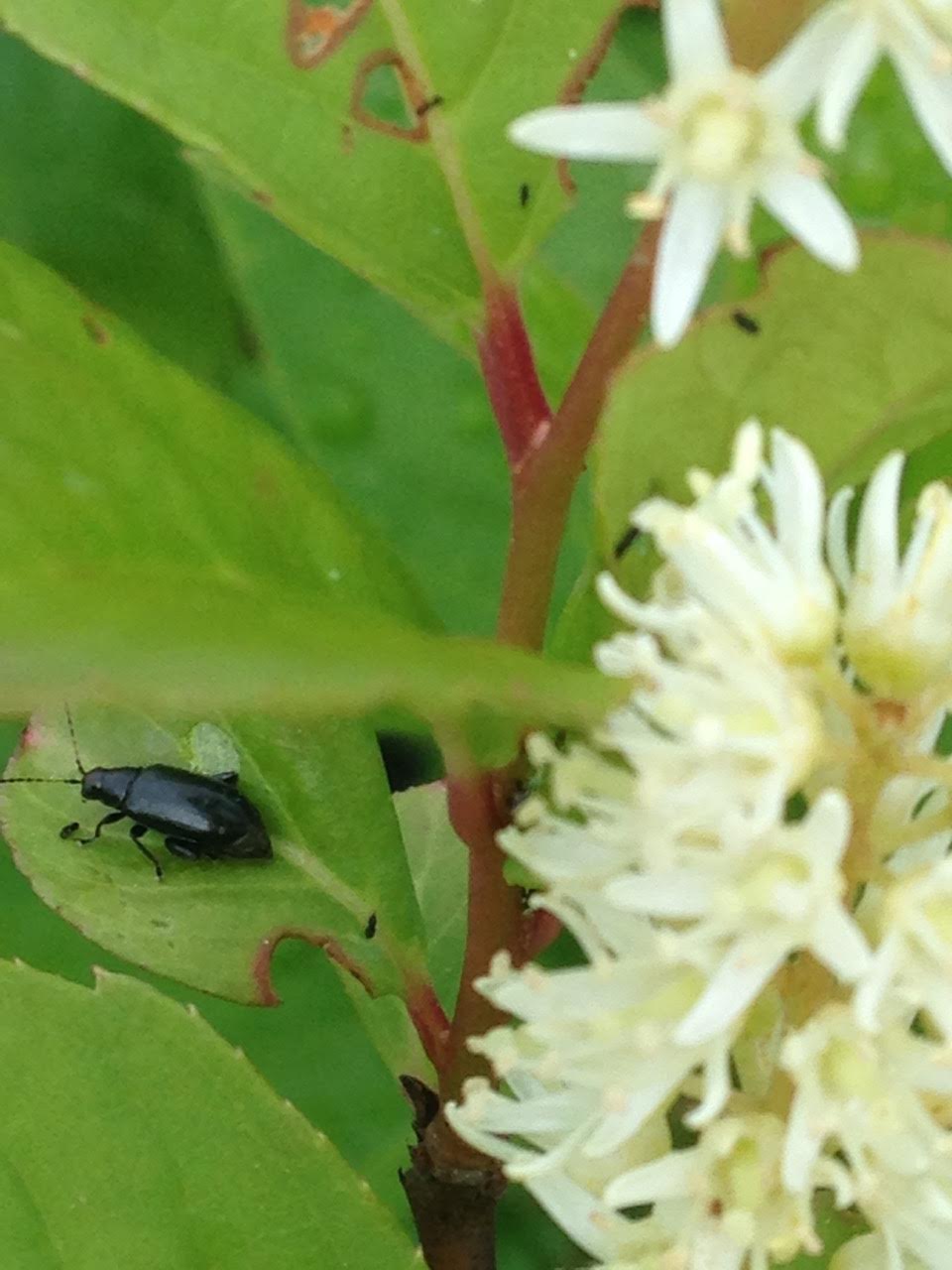 Red-headed flea beetle (RHFB) adults, Systena frontalis, feed on many ornamentals in container nursery production making plants unmarketable due to skeletonizing or holes in leaves. I know of or have heard grower concerns with this insect throughout the Southeast, Northeast, Ohio, and Michigan. It is native to the majority of the United States, from the east coast to the Rocky Mountains. I don’t know exactly when RHFB became a problem for container nursery growers. It seems to have coincided with or followed the Great Recession of December 2007 through June 2009. 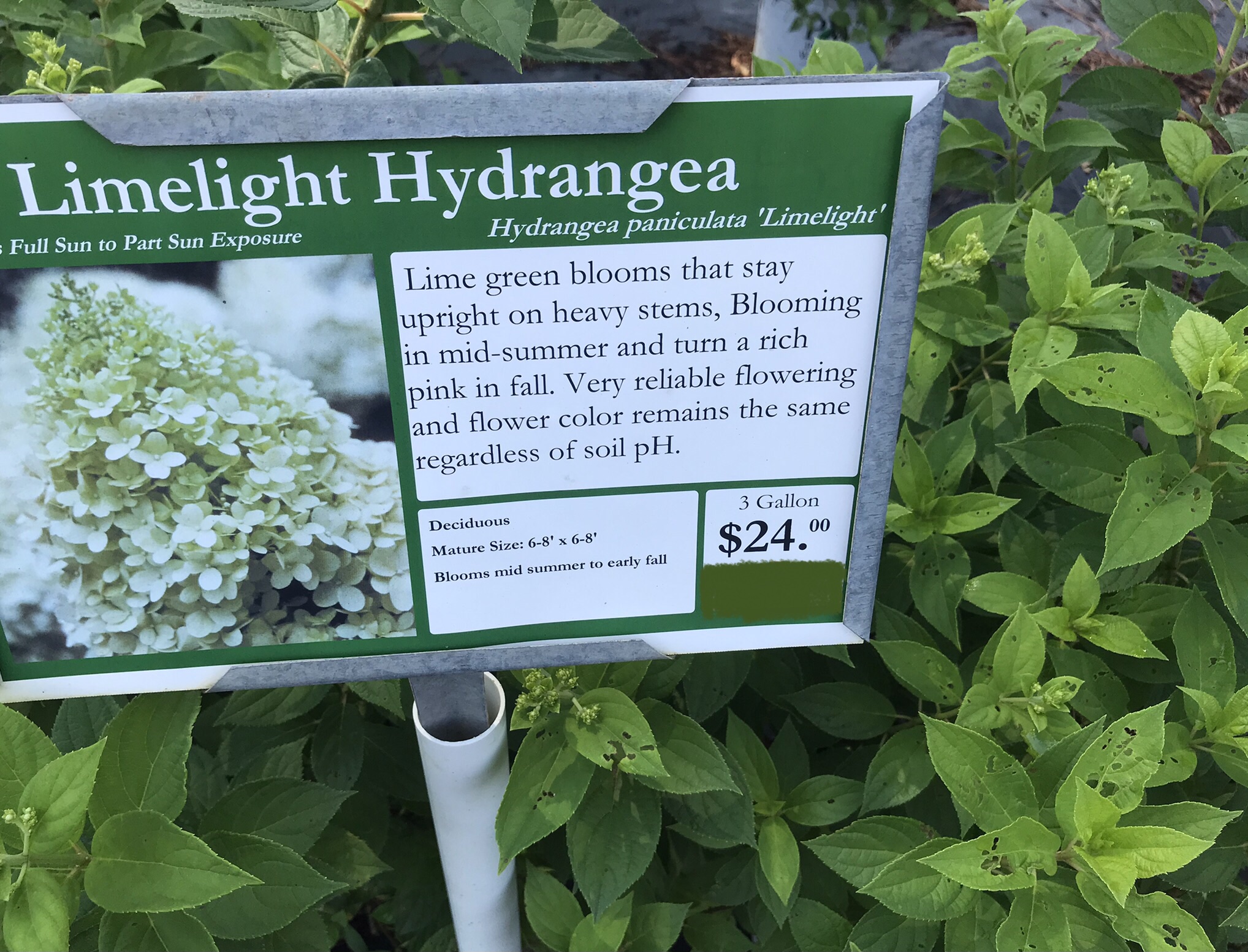 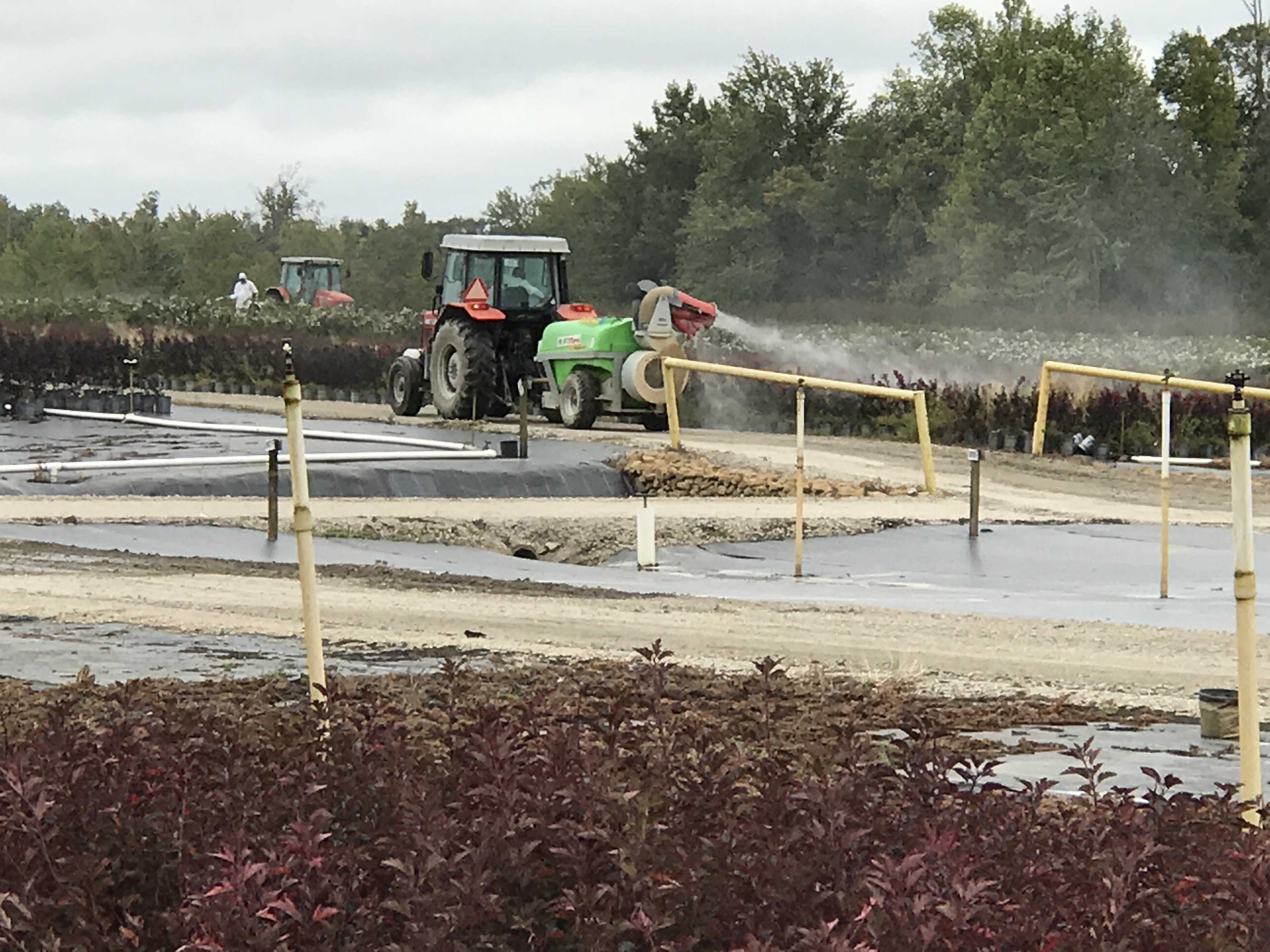 Traditional management has consisted of repeated adult foliar sprays. In 2017 I surveyed eastern North Carolina (NC) growers and found that acephate, bifenthrin, carbaryl, and chlorpyrifos were most commonly used to manage adult populations by making applications from weekly to monthly depending on pressure. Growers indicated managing RHFB was their greatest production concern and their responses guided me to search for more information and conduct nursery research and demonstrations.

In nature and soil-based systems, this insect has one generation per year (egg, larva, pupa, adult) and is not of concern except in North American cranberry production in the Northern US and Canada and possibly in other small fruit production. In container nursery production, RHFB may have up to 4 generations per year. I am confident that in eastern NC container nurseries there are 3 to 4. The insect overwinters as eggs in soil and substrate. 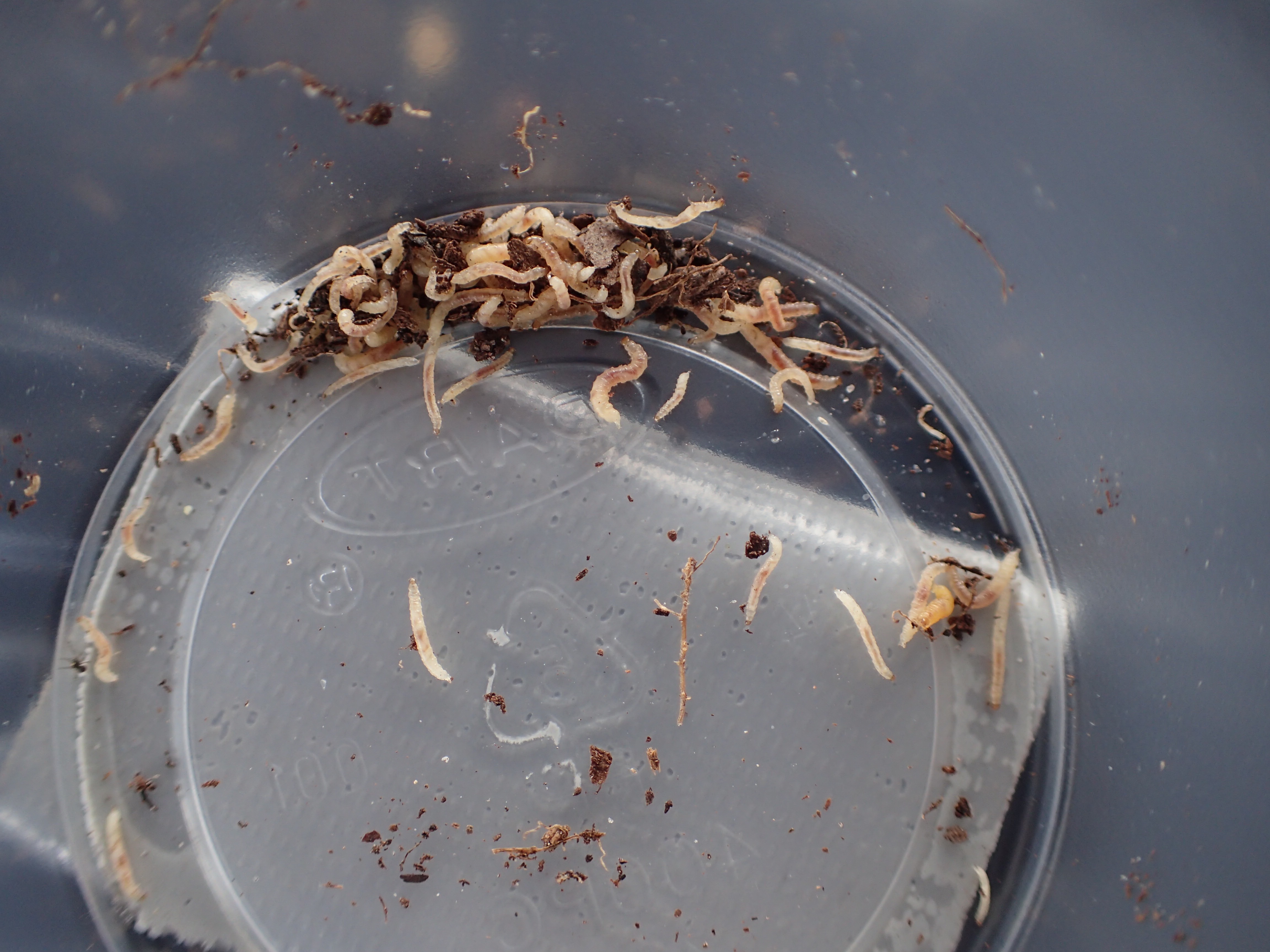 RHFB larvae can be found in large numbers in container substrates.

Following extensive discussions with Dr. Brian Kunkel from the University of Delaware and reviewing his research targeting larvae management with drenches of entomopathogenic fungi (Beauveria bassiana and Metarhizium anisopliae), several products as drenches directed at active larvae in containers (dinotefuran, imidacloprid, thiamethoxam, cyantraniliprole, azadiractin, bifenthrin), and drenches with beneficial nematodes (Steinernema carpocapsae found to be most effective), I decided to conduct my own drench research targeting larvae. 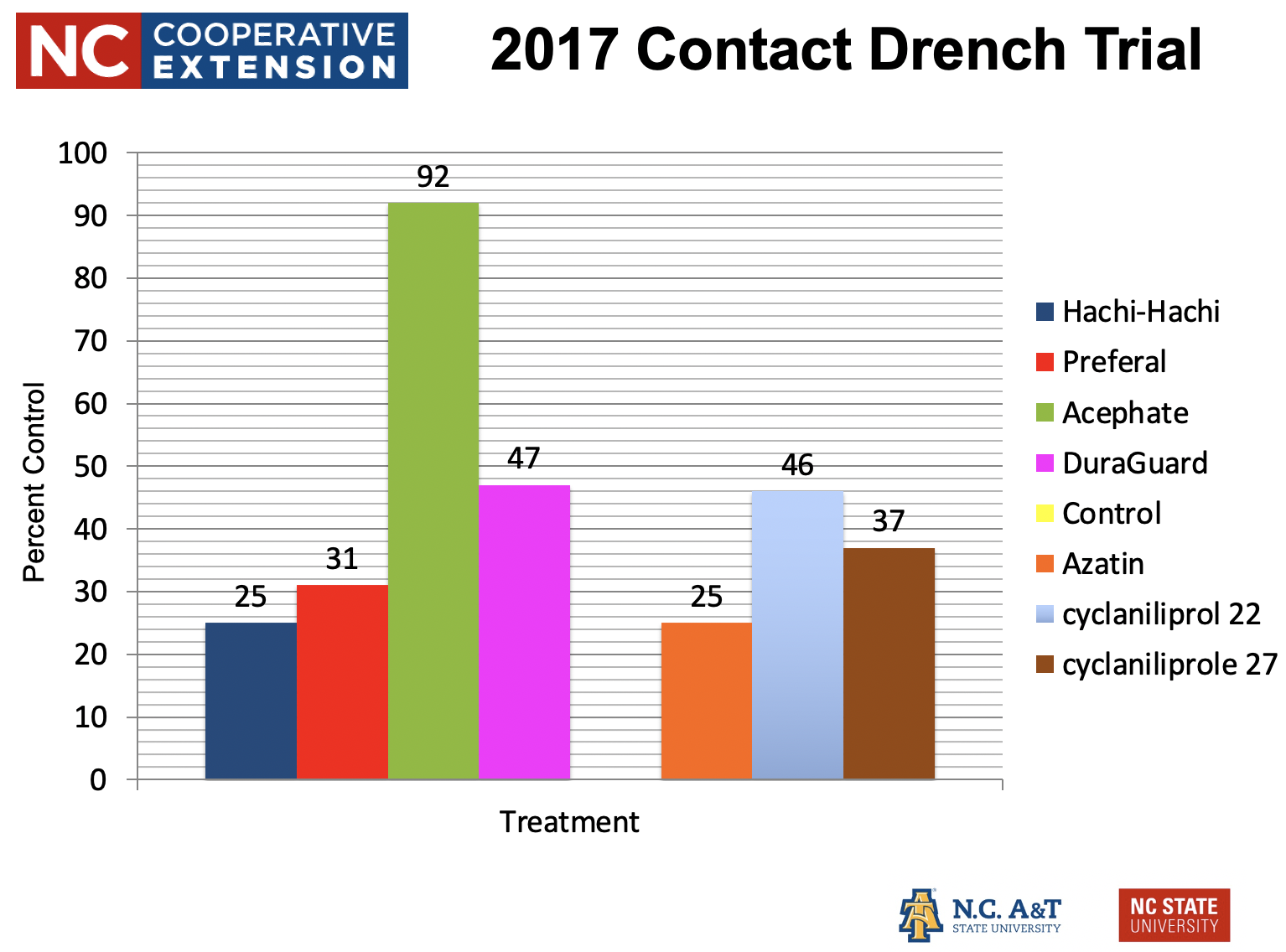 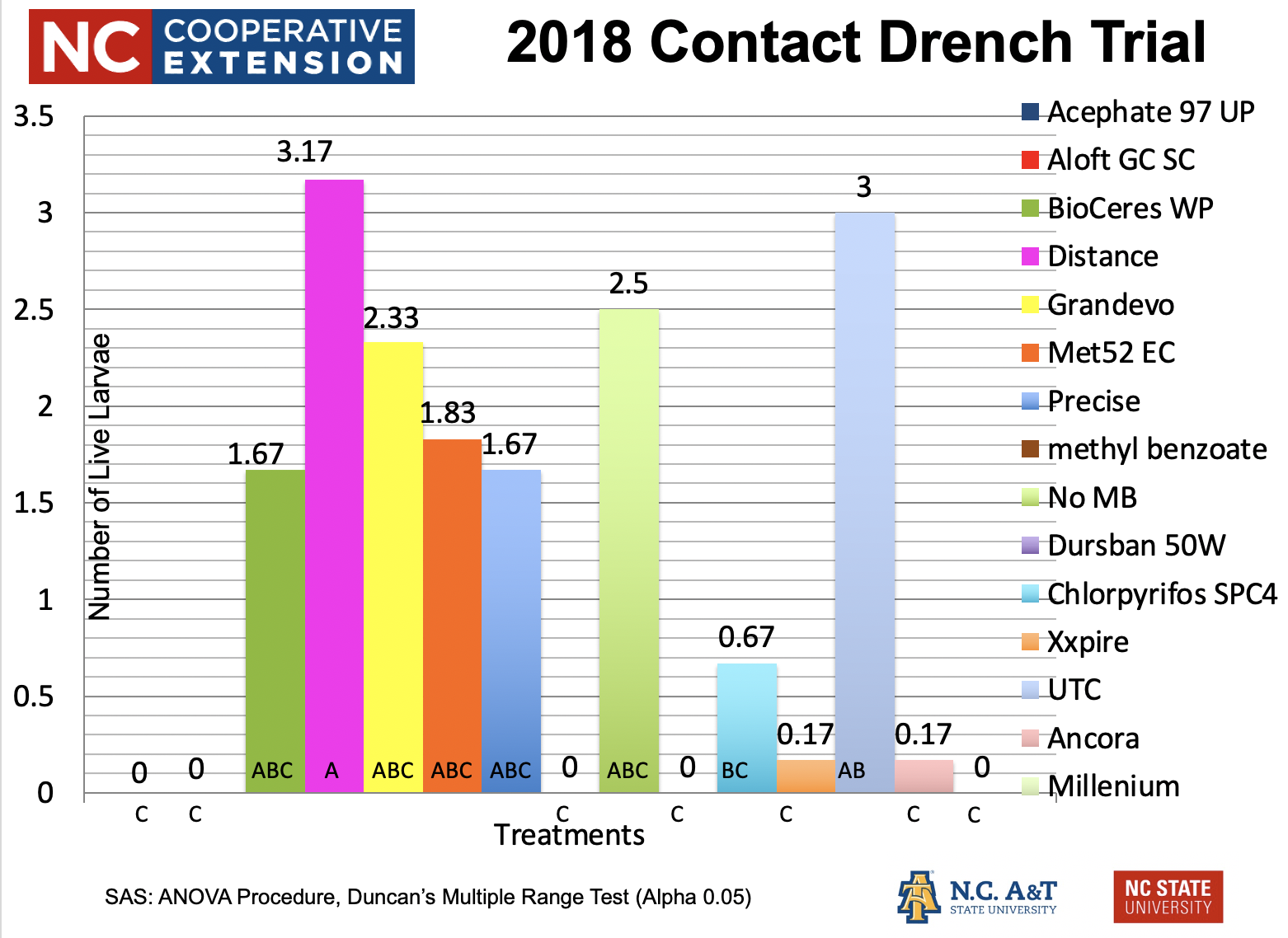 Another 2018 replicated nursery trial showed that many labeled neonicotinoid insecticides applied at their recommended rates prior to egg hatch/larvae emergence (212 GDD50) provided the best control (most 100%) and all other products significantly reduced numbers of larvae compared to the untreated control (UTC). 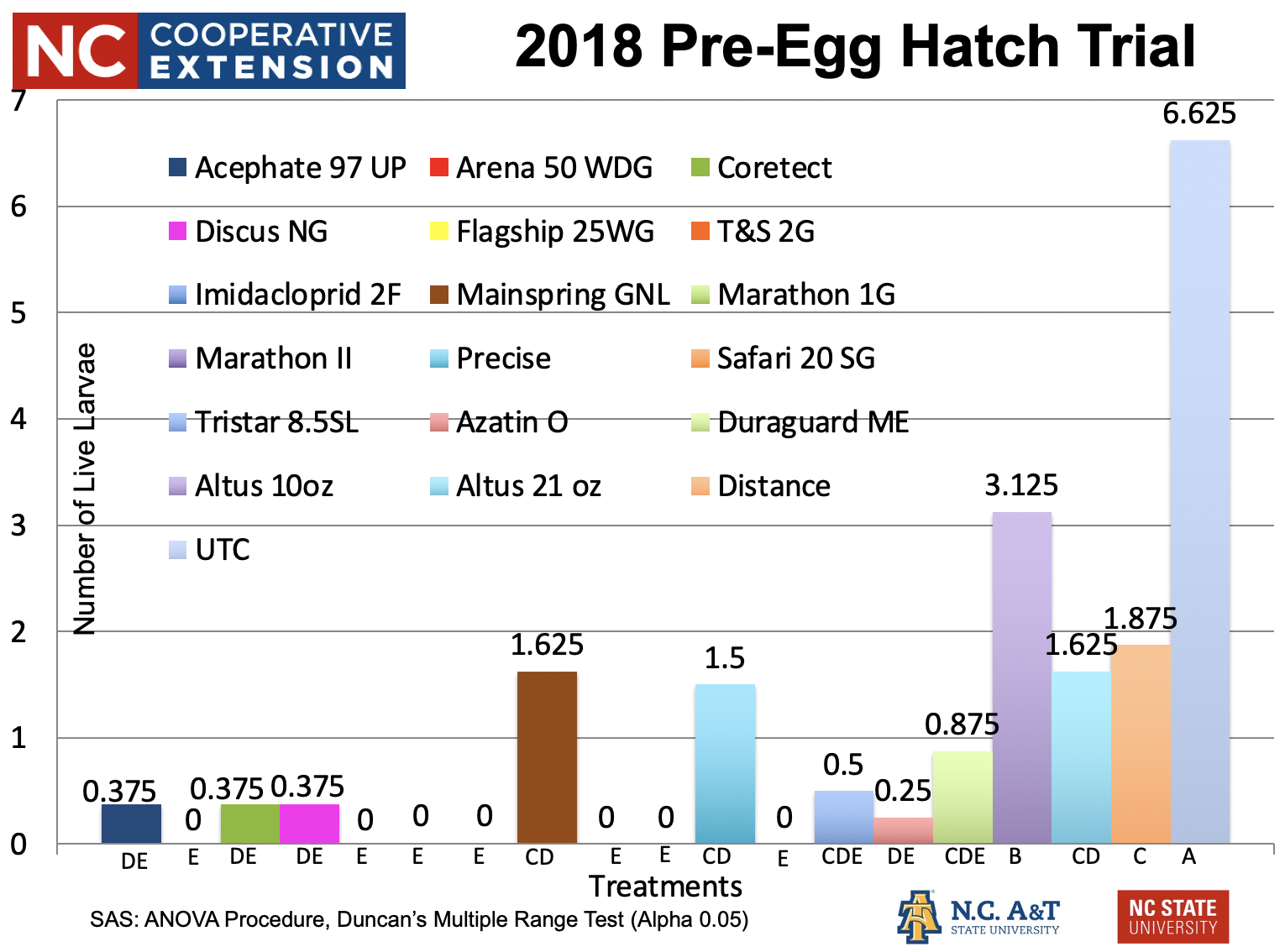 With heavy adult pressure, monthly foliar application of neonicotinoids or biweekly application (once every two weeks) of contact insecticides is not enough to maintain marketable plants (< 10% injury). Foliar contact insecticides often must be applied weekly to maintain marketable plants. The challenge is that many insecticide labels restrict the number of applications a year (for example carbaryl is 6) or have a maximum total rate per growing season or generation of insect. This is an opportunity to implement insecticide rotations that work within label restrictions and prevent insect resistance.

Neonicotinoids applied as drenches at potting or to existing plants prior to RHFB egg hatch/larvae emergence (approximately 200 to 300 GDD50), as granular topdress, or by granular incorporation can provide at least 60 to 90 days of adult control with less than 10% foliar injury without using foliar insecticides (depending on rate). It is important to note (due to concern of neonicotinoid use and pollinators) that many newly spring potted plants (like Itea virginica) do not typically flower during their first growing season. Many modified varieties of Hydrangea with double flowers or sterile sepals attract few bees (Mach, 2018). Also, spring or summer flowering plants that are potted in the fall will not be attractive to pollinators at the time of application.

Where are we now?

Start by following growing degree days in your area based on the closest weather station or record and calculate on-site. Keep a list of plant flowering at the nursery based on GGD50. This will guide scouting for first-generation larvae and adults. In eastern NC I start scouting containers for larvae in plants overwintered in protection structures around 200-300 GDD50 (redbuds in full bloom, when flowering dogwoods start blooms open), for larvae in plants overwintered outdoors around 350-450 GDD50 when Itea virginica flower buds start to swell, and for adults when older Itea virginica are in full bloom and Magnolia grandiflora start bloom around 800-1000 GDD50 (possibly earlier in plants overwintered in protection structures).

-Pre-egg hatch with neonicotinoids (drench or granular topdress available in several formulations), azadirachtin (from numerous suppliers), or cyantraniliprole (Mainspring GNL). Neonicotinoids provide the best control of larvae and adults and the longest protection from foliar injury if applied to rooted cuttings, liners prior to potting, are incorporated in the potting substrate, or are applied as a drench or topdress after potting.

-Make applications of adult foliar insecticides just prior to historical first-generation adult emergence or based on scouting susceptible crops closely and frequently. 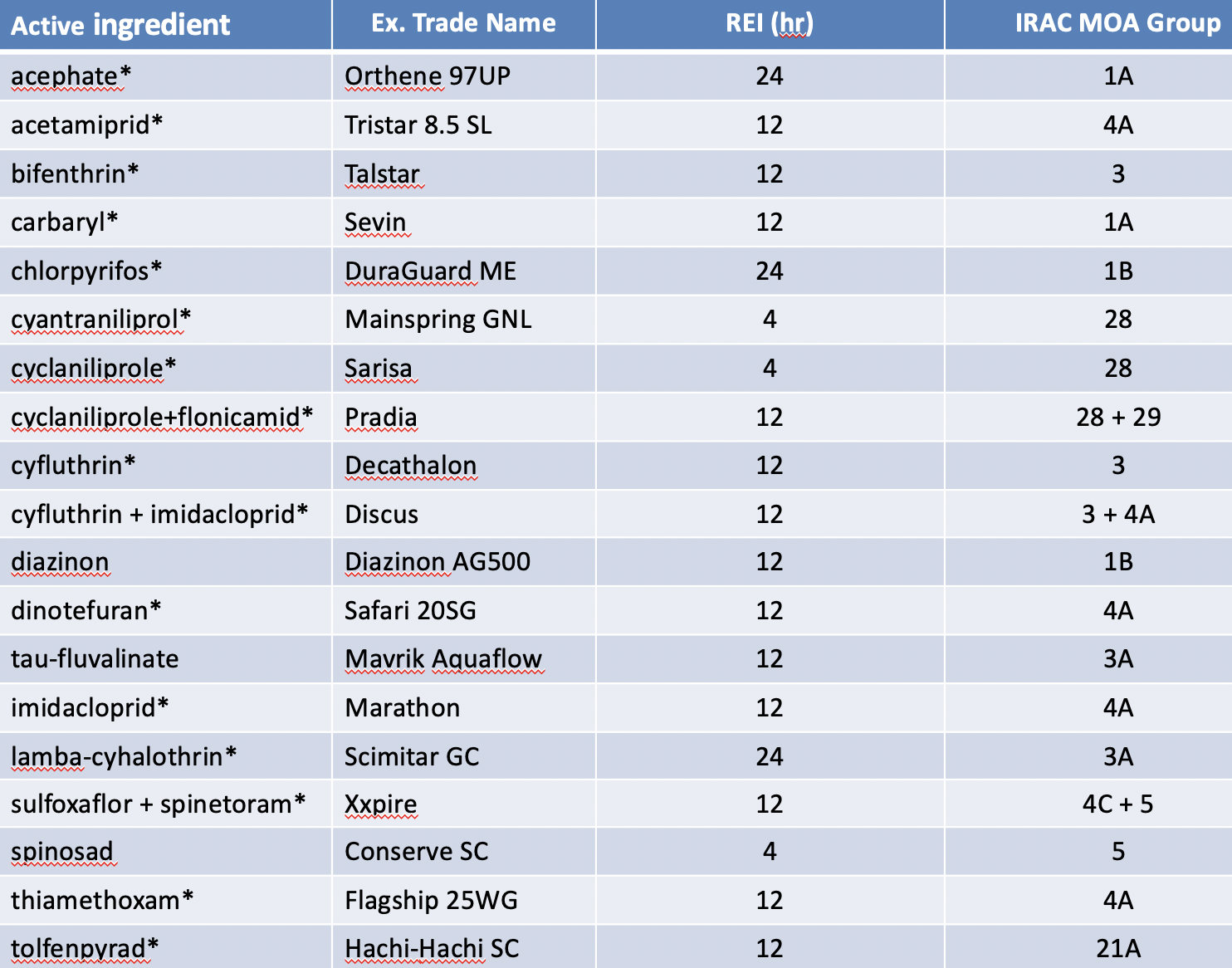 Foliar applied insecticides labeled for beetles or flea beetles. Active ingredients with an * have been proven to provide control in IR-4 trials, nursery demonstrations, and nursery research trials.

-Many foliar insecticides kill adults short-term but don’t break the life cycle. Repeat applications are needed during the summer to control newly emerging adults. Make sure to follow label instructions related to rate and a limited number of applications per acre and/or year, growing season, or generation of insect. Use a rotation of products based on their IRAC (Insect Resistance Action Committee) classification to avoid resistance.

In my experience, growers with greater numbers of susceptible plants held over from year to year have the greatest problems with RHFB. Know the most susceptible plants and manage production and inventory closely. Growers will have fewer problems with RHFB (and other pests or production issues) if plants are sold long before they have a birthday at the nursery. Consider split potting crops to fill plant sales demands throughout the year. This also provides the benefit of smaller crop blocks, lower pressure, less injury, fewer holds on sales, fewer sales credits, and prevents extra labor costs to prune and flush injured plants.

Finally, consider rotating the location of commonly susceptible plant species. Growers often put all deciduous plants in the same location year after year. Rotate those with conifer production to avoid population build-ups. This will also help with the prevention of conifer diseases, insects, and mites.