Find this article at:
go.ncsu.edu/readext?412026
— Written By Danny Lauderdale

While visiting eastern NC nurseries last week an insect called the azalea leafminer, Caloptilia azaleella, was mentioned. The next day I receive an email from a county agent requesting a nursery visit to confirm the presence of the same insect. Both instances were on Encore azaleas but this pest attacks all azaleas. 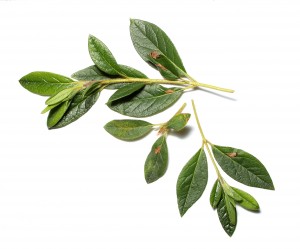 Azalea leafminer adult moths emerge about the time of first spring flowering. They overwinter as pupae in rolled leaves or as larvae in mined leaves. Adults are no more than one-half inch long and yellow with purple markings near the base and apex of their forewings. They stand at attention when at rest at a 60 degree angle to the leaf and have antennae the length of their body. 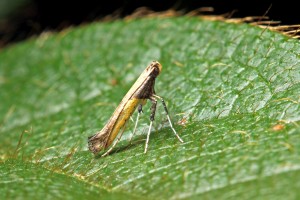 After mating, adults deposit individual eggs (up to 5) along the mid-vein on the underside of leaves. These should be visible with a hand lens when scouting. 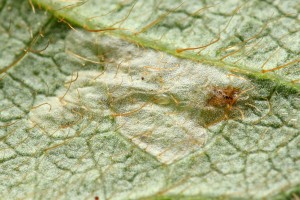 Azalea leafminer egg near center of image on edge of leaf mine, Photo by Matt Bertone

Yellow larvae are caterpillars. They hatch in about 4 days and enter the leaf tissue leaving mines that are light green. Larvae reach one-quarter to one-half inch in length at maturity. 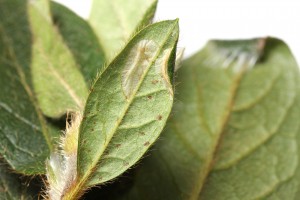 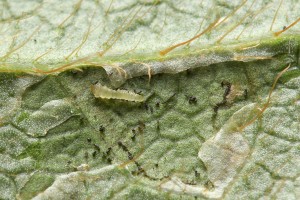 When they get larger the larvae emerge from the leaf and become a leaf tier. Leaf tissue in the abandoned mines dies and turns brown. 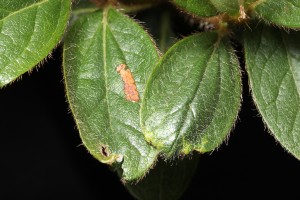 They roll leaf tips downward and feed causing holes and/or browning of tissue.

When larvae reach full size they move to the edge of the leaf and slightly roll it to pupate. Adult moths hatch in about 7 days and the process begins again. There are multiple generations each year in the south. 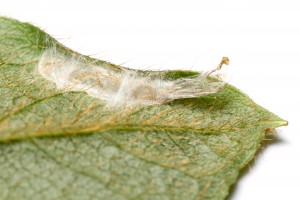 Adults can may be targeted with contact insecticides like pyrethroids (bifenthrin, cyfluthrin, permethrin). Abamectin (translaminar systemic), azadirachtin (insect growth regulator, botanical, and antifeedant), and spinosad (natural bacterium) will aid in control of larvae at first sign of injury. Systemic products to consider for rotation are acephate (organophosphate) and acetamiprid (the only neonicotinoid with some activity on caterpillars). Since larvae feed in the leaf tissue initially and they roll leaves to protect themselves, they are difficult to control with contact products only. Scout weekly starting at flowering to determine life stage present, need for application, and rotation plan based on insect development. There are some parasitoids that target this pest. 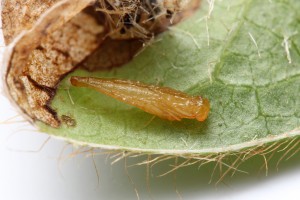 More detailed information can be found in the following references used:

At present in central eastern NC this pest is in it’s 2nd generation as an adult and will be laying eggs, hatching, and leaf mining soon. Inspect azaleas now for adults, signs of leafminers and leaf tiers, and symptoms of damage.