Find this article at:
go.ncsu.edu/readext?827451
— Written By Danny Lauderdale 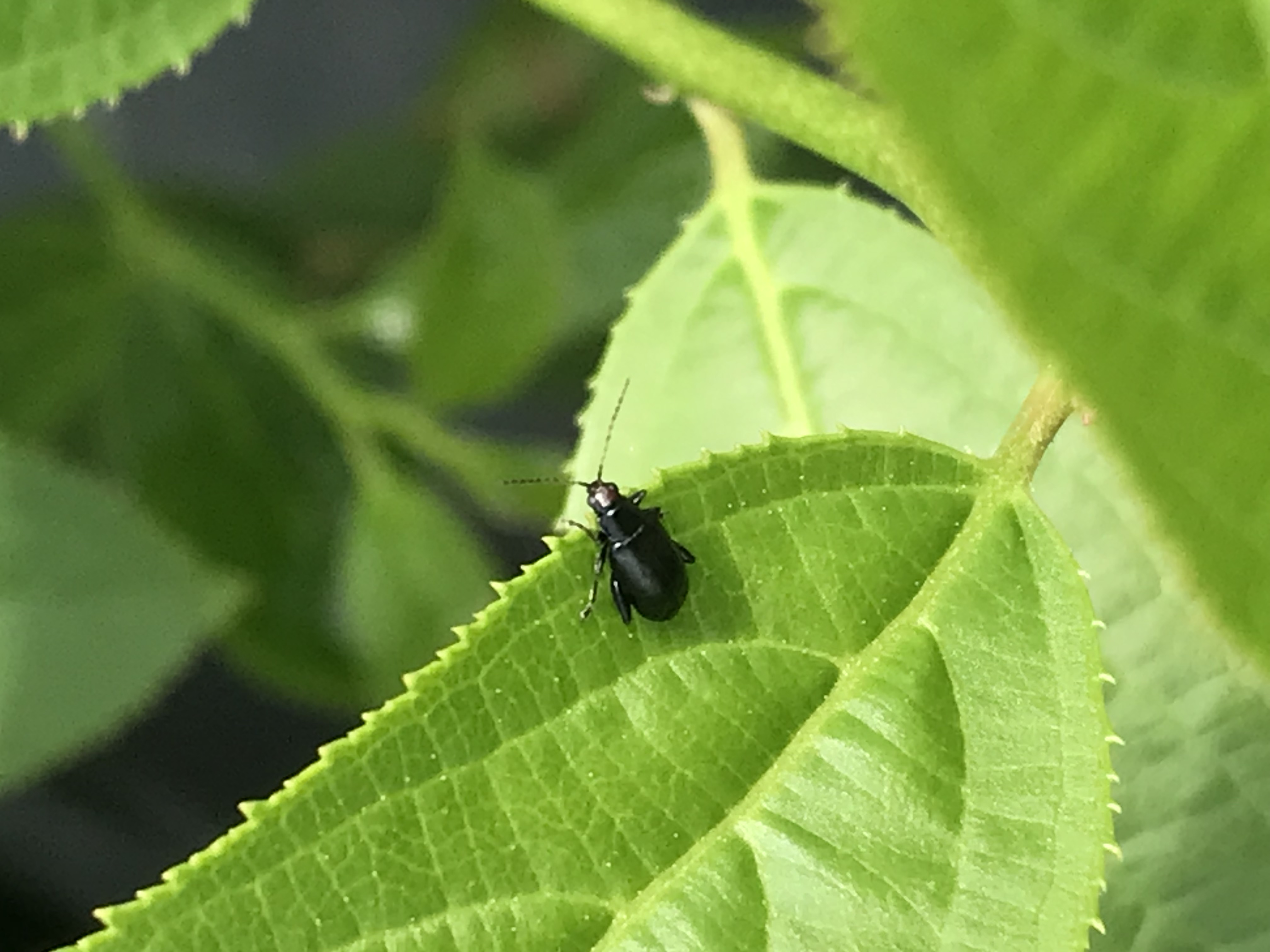 Red-headed flea beetle (Systena frontalis) has been a major insect pest of deciduous and evergreen container ornamental plants in nursery production since the great recession of 2007-2009. The beetle eats holes in foliage making plants unmarketable. I was able to conduct an in-depth nursery research trial during 2021 comparing three different rates of Mallet 0.5G insecticide which contains the active ingredient imidacloprid, a systemic neonicotinoid insecticide. The study idea came from growers who have wanted to find products that would not require repeated applications and high labor inputs to manage this pest. Here is a summary of the project. 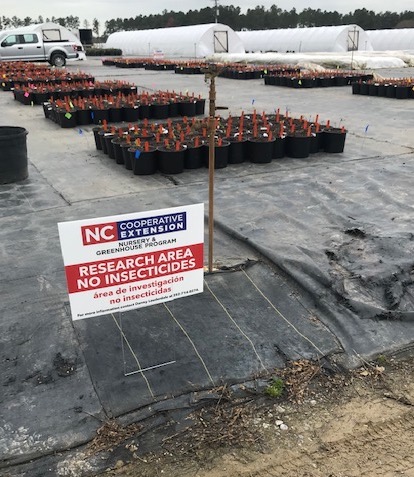 On April 1, 2021 960 3 gallon Itea virginica ‘Henry’s Garnet’ liners rooted in 6 cell packs were potted using 4 different treatments. 3 liners were potted into each 3 gallon container. Each treatment group consisted of 240 plants. Treatments included an untreated control using the nursery cooperator’s standard potting mix, a low incorporated rate of Mallet 0.5G (3.4 lb/ cu yd), medium incorporated rate (5 lb/cu yd), and a high incorporated rate (6.6 lb/cu yd). Plants were moved to a production area and arranged in a randomized complete block design consisting of 4 replicated blocks of 60 plants per treatment. With 4 treatments and 4 replications, there were a total of 16 blocks. Plants were watered with overhead irrigation throughout the project and no foliar insecticides were applied at any time. Plants were spaced on July 9, 2021, and pruned on July 15, 2021. Plants were monitored for red-headed flea beetle (RHFB) damage every other week beginning in mid-May. Ratings of foliar injury and percent of plants with damage were recorded once damage became easily noticeable. 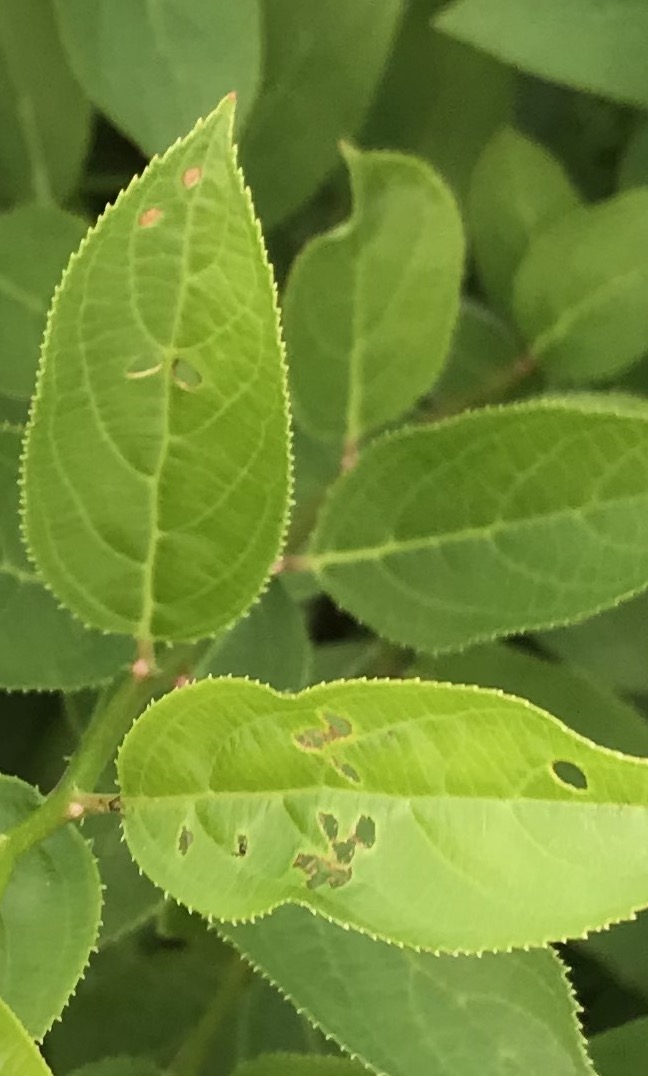 A greater percentage of untreated and low rate treated plants had feeding injury by the end of the study at 22 WAT, compared to plants treated with medium and high rate of Mallet 0.5G.

Although overall RHFB pressure was low in the study, differences between treated and untreated plants were obvious during the foliar damage rating period. By the end of the study there was a significantly higher percent of plants damaged by RHFB when treated with the low rate of Mallet 0.5G compared to the medium and high rates. All Mallet 0.5G treatments resulted in lower foliar damage ratings compared to the untreated control. This study showed Mallet 0.5G was effective when incorporated at potting and provided long-term reduction of damage. Based on the results of this study and other studies and demonstrations I have conducted, granular imidacloprid insecticide products are effective at reducing foliar damage from RHFB. You can expect to see some very low levels of damage even at medium and high rates since the RHFB has to feed on foliage to ingest the insecticide. I theorize that the pressure was low in this study due to use of small six-pack rooted cutting liners that were free of RHFB injury and population when rooted in 2020. The RHFB population in the study area seemed to slowly move in from plants in surrounding container production areas and remained low since many of the surrounding susceptible plants were moved to other finishing areas due to sales demand. My recommendation is to use medium or high rates of Mallet 0.5G when incorporating it at potting to provide the highest and longest levels of RHFB foliar damage prevention. 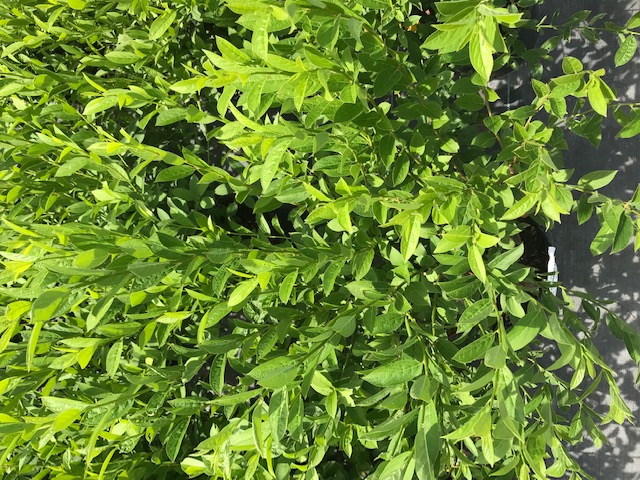 Based on my prior research, imidacloprid products are very effective at controlling RHFB larvae when applied to nursery substrate prior to egg hatch. It is important if potting up larger liners, (for example quart or 1 gallons) that had a RHFB infestation the previous year, to make applications for larvae in order to mostly eliminate first-generation adults in the crop and prevent early heavy injury to plants and subsequent population explosion. In eastern NC, treatments with imidacloprid targeting larvae are best made prior to 250 growing degree days based on 50 degrees Fahrenheit (GDD) and I try to shoot for 200 GDD. Drench applied liquid formulations of imidacloprid are effective also and seem to result in no foliar damage for at least 2 months (June and July) with one drench application at spring potting (April 15). Topdress applications of the other granular imidacloprid product labeled for nursery use (Marathon 1G) at medium and high rates have provided foliar damage prevention in studies and demonstrations lasting 3 months (June, July, August). In a demonstration done with drench (Imidacloprid 2F) and granular (Marathon 1G high rate) applications of imidacloprid, plants treated during their potting year (June 2019) had no larvae in their container substrate the following spring (April 2020) and had no foliar injury in June 2020. This was also true for imidacloprid (Imidacloprid 2F) liner drenches applied prior to potting and drenches of the same applied after potting.

Imidacloprid liquid (drench) and granular containing insecticides are effective treatments to help reduce damage caused by RHFB. As with all pest management tools, read and follow label instructions related to the application rates, maximum allowable per acre per year, and all other crop, environmental, and applicator safety precautions.